Thousands of customers were denied tracker rates and charged a higher rate of interest. 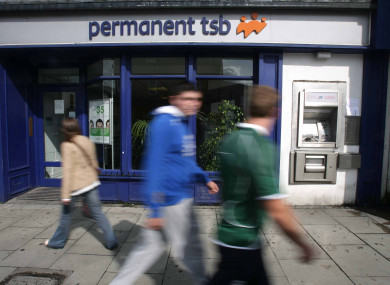 Over 125 Permanent TSB customers are still on the incorrect tracker mortgage rate, despite the bank identifying an error.

Officials from the bank, including the bank’s Chief Executive Jeremy Masding, were grilled by TDs and senators at the Oireachtas Finance Committee this morning.

The news comes just days after AIB admitted that it overcharged “several hundred” customers by as much as €500 by applying the wrong tracker mortgage interest rate.

The chief executive of AIB said this figure is in addition to the 3,200 customers already identified.

During questioning by Sinn Féin Finance spokesperson Pearse Doherty today, Permanent TSB officials confirmed that up to ten more families have lost their homes because of the bank’s overcharging on tracker mortgages.

This is on top of the 22 homes the bank admitted have already been lost.

The committee was also told that due to tax and accounting rules, the bank will not have to pay corporation tax for at least 21 years.

It emerged last year that financial institutions in Ireland had charged thousands of customers denied tracker rates and charged higher interest rates than stipulated in their agreements. The Central Bank estimates almost 10,000 accounts have been impacted.

The issue came to light when a court case, taken by Permanent TSB appealing the Financial Ombudman’s decision on four complaints, brought it to the attention of the Central Bank.

TheJournal.ie has highlighted a number of cases over the last year.

One such case is that of 40-year-old Ray Flavin, who was charged the wrong rate of interest on his Bank of Ireland tracker mortgage. The widower and father-of-five is now fighting in the courts to keep his home, despite the bank’s admission of error.

In July 2015, the PTSB identified 1,372 customers had been affected. Of this number, 98% have been given compensation, with the bank attempting to contact a small number of customers, about 20.

Of that number – about 250 customers – have lodged an appeal against the bank.

This could be done for a variety of reasons such as being unsatisfied with the redress, for hardship experienced and so on. Some 67 of customers’ cases were upheld by two independent appeals panels.

However, PTSB said that even though customers appeal, they still received compensation to their accounts.

Sinn Féin’s Pearse Doherty accused the bank abusing the statistics by giving the impression that 98% have been paid out and their cases closed, when in fact, nearly 18% of customers have made an appeal.

In addition to the 1,372 cases, Ger Mitchell, a senior bank executive, said the bank has since identified a further 579 additional cases of tracker mortgage overcharging, some 182 more cases than cited in March of this year.

Mitchell told the committee that the bank was in the process of putting these customers back on the correct tracker mortgage rate.

However, when pushed by Doherty for detail on this figure, it emerged that only 75% of customers were now back on the right tracker mortgage and some 125 were still on the wrong rate.

Doherty told the bankers that he was speaking on behalf of those customers whose lives have been left in turmoil because of the bank’s error, having lost money, suffered ill-health and, in some cases, lost their house due to paying more money than they had to.

He said it was “unacceptable” that some customers were still on the incorrect rate when the bank had identified that it was in the wrong.

Mitchell said the “timing of the review” and the “complexity of each case” meant it was not simply the case of “flicking a switch” and putting people back on the rate – a rate its customers are entitled to be on.

Doherty said the matter had been going on for “quite a period of time” and didn’t accept the bank’s excuses.

“Are you telling me the bank doesn’t have the capacity or hasn’t directed resources,” he asked, stating that the bank is continuing to take money wrongfully from people.

“I do not believe the bank is learning lessons… you are sitting here, telling me that you are currently wrongfully charging customers. What are we meant to say to that, as elected representatives, to say that is okay?

Mitchell told Doherty that all customers will be on the correct rate within four weeks. He said PTSB aims to have the additional customers “remediated fully before the end of the year”.

In April, there had been reports that financial regulators consulted with the gardaí on the tracker mortgage scandal. However, when Sinn Féin senator Rose Conway-Walshe if PTSB had been contacted by gardaí as of yet, the bankers replied: “no”.

Reflecting on today’s revelations, Doherty said no one has been held responsible for the actions across the banking sector.

“To hear of these new home losses is devastating. The arrogance of the banks in this scandal is breath-taking but nothing will change until accountability is forced onto them.

“Some banks are dragging their heels and, in all cases, I believe the banks have looked after their own interest first and only then began to seriously investigate,” he said.

Since the scale of the scandal has emerged, the Financial Ombudsman has said what the banks were involved in was “unacceptable” stating that his office has seen firsthand the level of hardship people have experienced as they struggle to pay back their debt.

If you would like assistance then please don’t hesitate to get in contact with Fin at info@fodsolicitors.ie or call 021 4204122.