Margaretta D’Arcy tried to perform a ‘citizen’s arrest’ of AIB bosses over the tracker scandal.

Margaretta D’Arcy tried to perform a ‘citizen’s arrest’ of AIB bosses over the tracker scandal.

D’Arcy – who has a history of taking part in high-profile campaigns and activism – took to the stage at the EGM today. 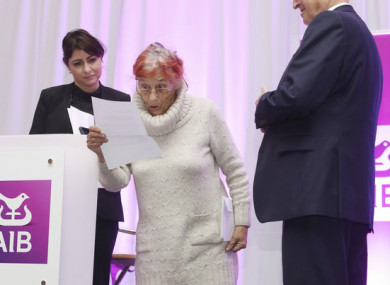 Campaigner Margaretta D’Arcy tried to perform a “citizen’s arrest” of AIB board members and executive management today at the bank’s shareholder EGM at the Ballsbridge Hotel.

D’Arcy – who has a history of taking part in high-profile campaigns and activism – took to the stage at the EGM before it began formally.

As she began her speech, some people attempted to tell her to leave the stage, but quickly gave up and allowed her to speak.

She read out a letter, saying that she was going to perform a citizen’s arrest of the board of Allied Irish Bank PLC as a result of the tracker mortgage scandal.

It is estimated that at least 20,000 customers were affected across a number of banks when they were either denied a tracker mortgage product or charged them the wrong rate of interest.

The final number, once the Central Bank’s examination is complete, is likely to be close to 30,000.

The number of AIB customers affected by the issue is above 4,000.

Speaking today, D’Arcy said the issue had “led to enormous physical and physiological damage to the victims, which in turn has put pressure on our social services, public housing resources, hospitals and primary healthcare”.

She closed her speech by saying that she was taking the board members into custody and escorting them to the nearest garda station.

She then addressed people on the stage, asking them if they would come with her.

After D’Arcy’s speech was finished, a number of those present clapped.

She was then gently escorted off of the stage and out of the room.

D’Arcy is an anti-war activist, a member of Aosdána and a well-known writer from Galway with a long history of political activism.

Most recently, she was jailed in 2013 for refusing to stay out of unauthorised zones at Shannon Airport during protests against the use of the airport by US military planes.

At the time was an active campaign for her release and she received separate visits from President Michael D Higgins’ wife Sabina and Sinn Féin President Gerry Adams.

She was released later that year.