KBC estimates up to 1,661 of its customers may have been impacted. 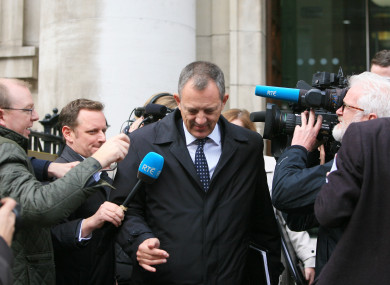 CEO of KBC Bank Wim Verbraeken and other bank executives were called into the Department of Finance last month over the scandal.
Image: Leah Farrell/Rollingnews.ie

KBC BANK IRELAND set aside almost €59 million in total to cover redress and compensation for customers who were impacted by tracker mortgage overcharging.

The tracker mortgage scandal resulted in thousands of people being either denied a tracker when they were entitled to one, or charged the wrong rate of interest on their tracker. These errors by all of the main banks in Ireland led to overcharging of tens of thousands for some families.

Today KBC announced its financial results for the third quarter of this year, and confirmed it had set aside €54.4 million for redress and compensation. This is in addition to the €4.4 million it had put aside initially last year in the early phase of identifying impacted customers.

This brings the total cost for KBC of of paying back customers what it overcharged them and compensating them for the damage caused at €58.8 million.

In October KBC confirmed 1,061 customers had been identified as impacted – 571 of those accounts were already rectified in 2010.

It said it anticipated up to an additional 200 to 600 cases may be impacted.

“KBC continues to engage with the Central Bank in relation to the identification of impacted customers and KBC expects to have concluded this identification process for the vast majority of customers impacted by year end,” the bank said in a statement today.

“All customers identified so far as having been impacted have been/are in the process of being contacted individually and redress and compensation payments have commenced.”

‘Look in the mirror’

Earlier this week Danske Bank released publicly for the first time information about the number of its customers impacted by the scandal.

The bank has identified 60 accounts where the incorrect margin was applied and customers were charged the wrong rate of interest. It said the margin error is 0.26% on average.

A further 18 customers who may have had a reasonable expectation of a tracker rate when their fixed term passed were not offered the option, or it was not made clear to them that they had the option.

None of these errors, according to Danske Bank, resulted in the loss of ownership of property. The bank has set aside €600,000 to cover costs of paying back and compensating impacted customers.

Ed Sibley, Deputy Governor of the Central Bank, in a speech on Tuesday said he expects individuals on boards and bank executives to be held to account for this scandal.

“As well as answering to the Central Bank, I would expect them collectively and individually to be taking a long hard look in the mirror, and as pre-approved control function holders to be actively considering their responsibilities regarding disclosure and whistleblowing,” he said.

Sibley said the Central Bank is “under no illusion” that continued pressure is required to ensure all affected customers receive redress and compensation and banks comply with its findings.